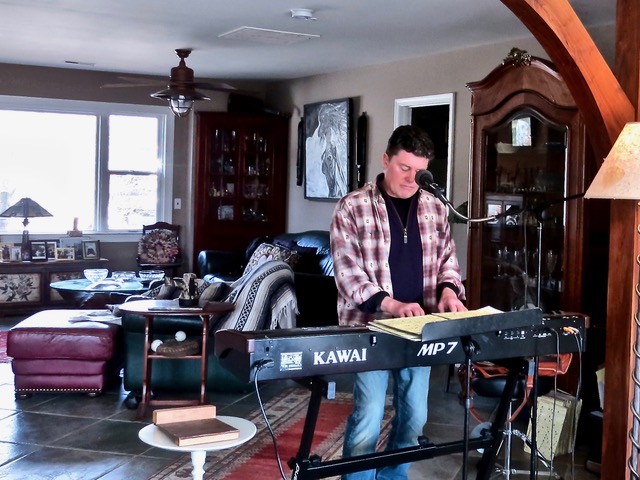 Steuart Smith, a lead guitarist for the Eagles since 2001, has a rare day off in the middle of the band’s first tour since founder’s Glen Frey’s unfortunate 2016 death. In Denver catching up on some needed sleep, a byproduct of grueling days spent performing in practically a new venue every night, Smith might also manage a bike ride or dinner with an old friend. And, yes, he is happy to take a phone call from me to kindly discuss Ben Mason, a good friend from the days of the early 70s when they both played at Mr. Henry’s Tenley Circle in Northwest DC.

Steuart is “a dear friend,” Mason told me. After our conversation I can understand why. Talented, successful with the professional recognition derived from playing in the Eagles, a band that has sold millions of records, boasting a plethora of top 40 hits.

However, when the Eagles first emerged as rock stars with the release of their eponymous first album, “Eagles,” a little-known Smith was trading dive bar gigs with his musical compadre Ben Mason. The two vied for top spots in DC’s thriving music scene.

“We should have been in competition with each other, as we were interested in the same sound. The musical style of our bands was a result of similar influences. But, neither of us was competitive in that way. So, we talked to each other, not as competitors, but as fellow musicians who respected the artistry of the other,” Smith explained to me over the phone.

Since those long-ago days in DC, Smith has collected top accolades, including session work with Rodney Crowell and Shawn Colvin He has toured with Don Henley’s solo band.

Persevering, Ben has also followed a successful professional trajectory that has incorporated painful personal revelation. His vision was shaped by a heroin addiction early in his career. He braved the toxic symptoms of abrupt withdrawal, two divorces and a subsequent long-term relationship that subjected him to adultery and fraud. In the song “Beautiful Mistakes” from his recent release, “Flesh and Bone,” he sings that the events of his past “give me the beauty of wisdom and a more discerning vision.” The track, on which Mason collaborated with Smith flawlessly, voices Mason’s hard-won understanding:

I’ll pack up my belongings, there’s nothing left to say
As long as I am living I’ll make beautiful mistakes
Tears turn to laughter, pain turns to joy
Beginnings turn to endings, there’ nothing to avoid
So move between the lightning and feel the earth that shakes
We learn this dance of living by making beautiful mistakes

And, Mason did, in fact, “pack up his belongings” departing to a 30-acre property in Rappahannock County, where he lives and works alone. I must admit that I was not prepared for what the nine hours I spent in his company revealed.

Mason uses his entire living space and its surrounding acreage as a “canvas.” Here, he has discovered not only who is the man he has grown into, but how that man is a product of a heritage far removed from the facts of his life.

Ben Mason’s bio lists his accomplishments. He was a guest musician on the Today Show. He earned a grand prize at the 10th annual Mid-Atlantic Songwriting contest. He opened for Billy Ray Cyrus in DC before 80,000 people during the 2014 Rolling Thunder. He has returned again in 2015, 2016 and 2018 to play before crowds of 40,000 gathered at the Lincoln Memorial.

An impressive resume. However, uncovering his own connection to land on which he resides is truly what captures Mason’s imagination. He has found an actual genealogical link between his family and the Native American people who 3,000 years ago occupied the site on which his house now stands.

Mason’s mixed media constructionist art incorporates stone tools, jasper arrowheads and clay pottery that he has found buried in the mud and silt on his property’s riverside. The river itself sets his daily rhythm. It offers a refuge. He soaks his body in its water, embraces the sun’s warmth on its banks and draws stories and inspiration from the land itself.

A collection of artifacts found on Ben Mason’s property. Many will be used in his art. 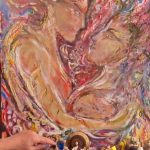 A painting with an arranged collection of toys underneath. 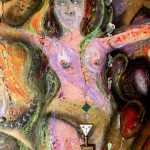 from a new series of paintings entitled, “Welcome Home.”

Mason has purposely imbued every aspect of his home with a sense of history. His creations, in my opinion, are akin to Andy Warhol’s “Factory” or Howard Finster’s “Paradise Garden.” Finster’s masterwork occupied several blocks in Summerville, Georgia, long before he ever earned widespread notoriety for the cover for REM’s “Reckoning.”

Ben Mason’s paintings, dioramas, song lyrics, keyboard solos and pages filled with ink will soon be published as a memoir of the road, jobs, loves and losses that bring him here, right now, bursting forth like the embrace of a familiar song.

Mason’s video for “Beautiful Mistakes,” released on July 20 features much of his original artwork. It came exactly six days before Smith performs with the Eagles at Nationals Park. The coincidence has led these old friends to reminisce about their lives in Falls Church, when they traded gigs.

For his part, Smith plans on bringing “that peaceful easy feeling” back to a city rippling with uncertainty on so many fronts…and to a band now stepping out after their leader’s recent death. Mason, having finally discovered his roots, continues to embrace his history meandering towards a truth incorporated into his very flesh and bones.

Author Bio: A concert junky, music aficionado, and live music reviewer for Hill Rag and DC Music Review, Leanne Tankel studied writing at both UC Berkeley (BA) and Boston University (MA). In addition to music reviews, she writes prose and her manuscript, Broken Hallelujah: notes from a marriage, was a 2011 short-list finalist for the Santa Fe Literary Awards program. Leanne lives with her three sons and two pugs in Northern Virginia.